The following is from a speech I gave during my Toastmasters meeting on May 9. I had to research a topic and speak about it within a 5-7 minute time frame.

My friends and family call me fearless and in some ways I can see why.

Need someone to go to a combative or war-torn country to report on economic conditions? I’m your girl

Garret and Noel need a Toastmaster General? SIGN ME UP

There’s not a lot that scares me. But something happened a couple of months ago that stopped me in my tracks and really made me think a lot about fear.

It was a Friday afternoon and I was heading downstairs to get my clothes out of the laundry room when I stepped on the elevator in my apartment building, watched the doors close behind me, and went absolutely nowhere for over an hour.

You heard that right I got stuck. In an ELEVATOR.

For 75 minutes, I employed every tactic I knew to keep calm and carry on. I paced. I inhaled, I exhaled. I texted my mom. I texted my sister, I posted about my probable demise on social media, and when I ran out of things to do, I stood completely still and prayed to the elevator gods that the cables weren’t going to snap. I was doing everything I could think of to keep my fear of death at bay.

For 75 long minutes, I waited to be rescued from what now felt like a steel prison. When the fire department decided that they’d need to jimmy the door and slide it open, I helped push the door open as though the fire of a thousand suns was feeding my energetic need to push. In reality, it was a catecholamine response and my adrenaline had launched into fight or flight mode.

It’s funny what your body is capable of when it senses you’re in danger.

After I got out, I crumbled on the hallway floor. I don’t remember much immediately after I was sprung but I do remember hearing one of the firemen telling me “Well, young lady, you’re going to have one heck of a story to tell your friends.”

And I did have a good story. A lot of people told me that was one of their biggest fears. Well, that and public speaking. I’m not so scared of public speaking, but the elevator? Let’s just say I’d found a fear-filling new enemy.

My sudden fear of the elevator really got me thinking:

According to medical journals, textbooks, and even the dictionary, in its simplest terms: Fear is a vital response to danger.

And despite being our most fearless when we’re but wee little infants, we’re born with a need to be afraid.

Fear has served us well from the beginning of time. From an evolutionary standpoint, staying away from that which could kill you helped keep the population growing. After all, if every Tom, Dick, and Caveman ran toward the wooly mammoths, we wouldn’t be here today.

Fast forward a few millennia, and fear is still serving a purpose. Fear helps us protect ourselves from danger and In fact, fear is, on some level, a survival skill.

But if left unchecked, fear can also be very limiting.

Sometimes fear of the unknown can wreak havoc on our lives.

In fact, 90 years ago, fear that there was no faith in the American economy actually became a self-fulfilling prophecy, bringing upon us crippling financial drought which we all know now as the Great Depression.

As the country struggled to emerge from the Great Depression newly-elected president Franklin Roosevelt reminded all of us during his inauguration speech that: The only thing we have to fear is fear itself.

And in saying that, Roosevelt was reminding everyone: being fearful just creates more fear.

FDR was spot-on about fear creating more fear. Fear can have a snowball effect.

I want you to think about that for a second. How many real threats have you encountered that have rolled into a giant ball of fear that now sits in the pit of your stomach when you think about embracing that threat? 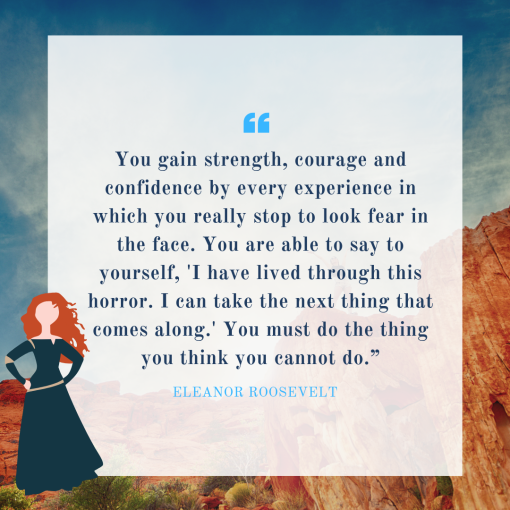 Going back to my incident in the elevator, for a full week I was petrified of using the elevators in my building. Despite my arthritic and degenerating knees, I climbed and descended 9 flights of steps multiple times a day all to avoid using the elevator.

The perceived threat I had that I’d get stuck in the elevator AGAIN and that this time I would plummet to my death overtook my mind. Never mind that when I got to my car or my apartment, I could barely move my knees. The fear of being trapped again snowballed into anxiety at the thought of riding the chamber of death.

For the sake of my knees and my future peace of mind, I knew I had to the one thing I feared most: Get back on the elevator. I needed to desensitize myself to the very thing that created the fear in the first place.

I think Eleanor Roosevelt — who also happened to be married to Mr. Nothing to Fear but fear himself — gave the best advice to all of us want to overcome that which scares us:

“You gain strength, courage and confidence by every experience in which you really stop to look fear in the face. You are able to say to yourself, ‘I have lived through this horror. I can take the next thing that comes along.’ You must do the thing you think you cannot do.”

I encourage all of you to do the thing you think you cannot do.

Look fear in the face and tell fear that it’s not winning this time.